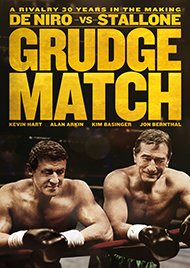 You know the drill. You’re looking for a movie. You’re in that vibe where you’re just browsing for something solid for the next 120 minutes (i.e. like me, during a flight… or on a random Friday night when you’re plans have been cancelled at last notice and you’re staying in, instead of making new ones). In this mood, you’re after something good, but not too involved, not too stressful or deep… so you browse through the titles, they’re usually ones that didn’t have dozens of billboard ads or coverage on radio, they’re titles you haven’t heard of before so you literally judge by the cover, actors, and synopsis.

I’m not usually one to press play on a boxing movie, but anything with De Niro has me at hello, so I went for it. God love him. From the cover, this looked to be a pretty predictable “old men seek to return to their youth” story, but I spent the next 120 minutes being surprised by a story that was charming, emotional, funny, and somehow nostalgic. Grudge Match, starring Robert De Niro and Sylvester Stallone tells the story of a long-standing boxing challenge, started in Pittsburgh in the 70s and 80s and yet left unfinished, unanswered, until now.

What I liked most about this film was that I woke the passenger sitting next to me at least three times with unexpected ‘laugh out loud’ moments.  My big grinned teeth where exposed in the glow of the screen-light, in the dark airplane cabin. I don’t normally react to entertainment that easily (especially alone), I can be watching something hugely hilarious and retain full composure, but because this film doesn’t take itself too seriously, I felt like the actors, with hundreds of years of experience combined, have actually ad-libbed some of the hilarious moments in the script themselves – to the point there are some true ‘funny-funny’ moments over the expected ‘scripted-funny’ that you get in a film like this.

We’ve all grown up with Stallone and De Niro through our childhood’s and adolescence… so watching them ‘get old’ might seem awkward, like something you’d rather not see, so as not to spoil their legendary ‘best years’ and roles, but in this movie you just grow any existing sense of pride for them, as their acting charm just hit a soft spot with you (even with Stallone!) – by the end, you’re really undecided on who you want to actually ‘win’ out of the two boxers – something telling of a story that builds characters well.

So next time you’re browsing covers, look out for the bright yellow one with the two old guys punching-on. You’ll probably get more from it than you expect – I honestly did.

I’ve got two copies of “Grudge Match” to give away, simply comment below or on the Facebook post to let me know your fave De Niro movie of all time, and why – for your chance to WIN. Entries close September 15th 2014.

This post is sponsored by Warner Brothers Australia and all opinions within are truthfully my own.