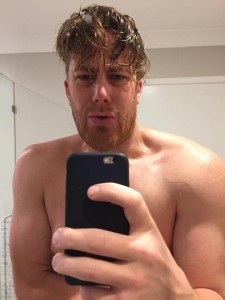 Over the past-two weeks I’ve found myself addicted to one particular facebook (slash-actual) friend’s daily newsfeed updates – as he embarked on a seemingly crazy personal experiment on himself. My friend Jay Morgan was, and still is, “trying to follow a guide to a better start to the day” which includes taking a completely cold shower each morning (the guide is worth a look). This sounds pretty easy and rolls of the lounge with little thought… until you think about Just. How. Hard. This. Would. Be. – especially in the middle of this freezing cold winter, immediately after getting out of your doona! I’ve been fascinated by his observations over the past two weeks and felt compelled to share them, especially for the result and outcome today, on day 14 of his experiment.

It’s worth noting the specific benefits he was seeking, directly from the medium article by Benjamin Hardy, that “Cold water immersion radically facilitates physical and mental wellness. When practiced regularly, it provides long-lasting changes to your body’s immune, lymphatic, circulatory and digestive systems that improve the quality of your life. It can also increase weight-loss because it boosts your metabolism. A 2007 research study found that taking cold showers routinely can help treat depression symptoms often more effectively than prescription medications. That’s because cold water triggers a wave of mood-boosting neurochemicals which make you feel happy.”

So let’s see how Jay went getting cold and happy… Just before we start I want to quickly say how much I love having friends like this – who try stuff out, who step outside the box – just because. This particular guy is one of the most creative, interesting, inspiring people I know – and I just wanted to preface these daily status updates with this fact, so you get an idea of who’s talking here. A thoughtful, quirky, clever, influential, generous… and, above all, curious man.

Cold shower regime DAY 1: I’m trying to follow a guide to a better start to the day and cold showers are part of it.  So much harder than I thought!
– Mind over matter helps, had to convince myself I was jumping into a cold ocean
– Heart rate sours and body stiffens up, good opportunity to practice lowering heart rate and relaxing the body
– after 30 seconds it gets easier, still not completely comfortable but not as shocking
– shorter showers (duh!) you get clean fast!
– Surprising sense of happiness and laughter, hard to explain but while drying off I started laughing and felt amazing, still feel amazing!

Apparently it kickstarts your lymphatic system, gets your heart beating and muscles tensing / relaxing and release happy drugs.

Day 2: mentally slightly easier, at least I knew I wasn’t going to die
– still a huge shock to the system though
– incredibly alert again post shower, definitely a cure for sleepiness! (Not a cure for sleep!)
– felt it easier to stay in a bit longer this time
– was able to slow heart rate a bit more but still pounding throughout!

Will update later this morning to see if it has the same ‘buzz’ effect of yesterday.

Day 3: Did the method suggested by Scott Player this morning (standing under the shower then turning it on vs turning it on and jumping under) this was significantly less shocking, felt like cheating J
– Much easier on the whole 3rd day, feel like my body is becoming less sensitive to it
– instantly awake and not a shred of sleepiness that I normally feel throughout the getup routine
– Big change in my skin, much smoother and less irritation but I shouldn’t be surprised my doctor has been telling me for over 15 years to have cool showers, hot water = bad for skin

Day 4 –  Went back to turn on jump under strategy and it’s definitely more of a rush
– Find I’m building up a mental strength to the act, day 1 I stood in front for at least a minute terrified of what was coming and whether I could do it at all, now I just turn it on and step under
– Finding it much easier to control my reaction to the shock now, easier to drop my heart rate
– also found it almost impossible to relax the first 2 days, muscled completely tensed but now I relax a lot quicker
– still find that my breathing is shallow and short, like little gulps
– Feel totally awake again, Saturday mornings are normally slow and sleepy but I’m totally alert now!

It’s a big call only 4 days in but I can already see huge benefits from a continued regime beyond the 14 day trial I’ve set myself.

Now let’s get into the day

Day 5 – mind over matter muscles getting stronger, I just turn it on now and jump under, I still think about it for a second but I just do it
– better heart rate control again today
– was able to just stand there and stop my body reacting to it all, just go calm like nothing was happening. Then I realised I was standing under a freaking cold shower and stiffened up again!
– feel totally alert, no sleepiness at all, skin feels good

I’ve been out most of the morning running and walking the dog so it was a midday shower, such a cold day I think the effects are still all the same as an early morning. Let’s go, Sundeeee!

Day 6 – It’s surprising how quickly you can embrace a new thing and leave something you enjoyed behind.

– Big realisation today was how quickly I’ve become used to this new practice and how I genuinely don’t crave a hot shower
– Easier again today to just turn it on and step under, there’s still a second of doubt but mentally it’s not a difficult decision
– Hour and a half later I still feel energised, alert and totally awake
– Just to feel this awake in the morning I’m not sure I’ll be able to give it up after my 14 day test – Let’s go Monday

– frustrating start, battery in car dead, had to run to the gym (the irony is not lost on me), felt like I was on the back foot all morning
– almost backed out of the cold shower I was that pissed off!
– stayed true and stuck with it and I’m glad, felt so much better after, kind of like a reset
– I was still frustrated but the cold shower at least halved my pissyness

So long story short I haven’t got around to writing today’s post till now, yeah it’s been one of those days. Halfway through my 14 day experiment is have to say I’m feeling better for it – life’s always more interesting when you’re doing new things

Day 8 cold shower regime: You’ll be surprised what you can do.
– I’m able to simply turn on and step under now without dreading the cold bite, in fact I kind of look forward to it!
– weird thing now is how my body has adapted to the change
– I can stand with the water on my back and it doesn’t even feel cold anymore, weird right? I’m sure some medical genius could explain this

As I mentioned yesterday, just to change things up has had a tangible benefit on the mind and in so how I feel in my body.
Perhaps the biggest benefit of all is reminding myself that in we life we are either expanding or contracting – pushing out or being squeezed.

It’s good to do the uncomfortable and push against the tide.

Day 9 cold shower regime: On the other side.

Side anecdote: was talking with a friend yesterday who said if you’re averagely fit then running a marathon or half marathon is all in your head, I feel like that with the showers.

– mental resolve is pretty rock solid now, no flinching, no hesitation just get under
– still feel a buzz of feel good endorphins after each time, that alone is worth it
– here’s the weird thing, after I’ve dried off I don’t even shiver, it’s like it resets my base temperature or something like that!

Only 5 days for the experiment to go, the thing that really makes me curious is if I have a hot shower on day 15 will it completely reset my adjustment to cold ones?… Oo!

– This is what habit forming and mental fortitude are all about I guess, choosing to do something even when you don’t feel like it till your discipline is stronger than your urge

– In saying that this is one habit that has had tangible benefits from day one, whereas my 18 month journey to weight loss and true strength was not in anyway immediately rewarding

– I almost found myself turning the shower on normally, to hot this morning

– but I snapped out of it and realized two things: no habits are formed without persistence and two that the last person to use the 2nd bathroom had turned it to the hot position

– that said the shock factor was higher this morning for some reason, not sure whether it was the sleep-in or the warmer house but it was harder

– the benefits are still there: full alertness, eraser of sleepiness, endorphin high, don’t feel the cold after

3 days to go it feels like I will still need to decide each morning, but I hope it becomes a discipline that’s easier and easier to do each day with practice.

Day 12 – The night is darkest before the dawn.

– I’m not going to lie this morning was hard, I’d been up a bit during the night with a stomach bug, so not feeling the strongest in mind or body
– Also I could really feel that cold front that Ch.7 created to drive ratings – god it was cold this morning!
– But nonetheless I jumped under and was surprised how quickly relaxed I became, it really is an acclimatisation process

So 2 more days to go with the experiment before I decide to keep going and make it a habit or have a hot shower and risk losing the acclimatisation effect.

Day 13 – Prepare yourself to feel good.

I woke up feeling a lot more centers and happy, compared to yesterday, and before I stepped under I thought “this is going to be great, here we go!”… that self primer made all the difference

My learning for today is that you’ll get more out of things that are hard work if you prime yourself to enjoy it before you do it. This isn’t new news to sports psychologists, chatting to my personal trainer this morning “yes totally, you have to prepare your mind before a game, before a training session or before attempting anything difficult”.

This is a short one. The 14 day experiment is over.
Most of you are glad it’s the end and you have to stop seeing these posts but for those that want to know what it’s like go back to my page and take a look at the highs and lows of what happens.

Quick summary:
– Cold showers wake you up and get you started for the day like nothing else I’ve ever done
– Natural high, worth the shock
– Mental disciplining and knowing that I can push myself beyond my comfort zone

Final word – life is way more exciting when you change it up.

Fascinating (thank you Jay!) – makes you think about having a go yourself right? I’m interested, but going to wait until Spring at least!