It’s funny, the things you learn about ‘taking time to be me’ after having a baby. For me, if I was out without my baby girl for a few hours early-on, I had to know she was safe, secure and happy (tick tick tick) but also that she was literally in the best state she could be in. If this wasn’t the case, my time away from her wasn’t spent at ease. I would be in downward dog at a (would-be) relaxing yoga class wondering whether my sister knew the baby would need the sleeping bag and the white noise (… and exhale). I’d be at a girls lunch half-thinking about the nursery room temperature. I would be in a movie theatre losing concentration because I couldn’t remember if I told bubs’ Grandma that the freshest breastmilk was on right hand side of the fridge and should be used last (… yes, pass the popcorn).

In my experience, having quality time to be yourself actually begins by building your own confidence in your support network’s ability to care for bubs (at optimum mum-standard capacity!) without you there. This means that as a mum, you build & gain confidence that your partner, your mother, the grandparents, the babysitter, brother, friend – whoever is looking after bubs are completely equipped to handle the time and the baby just as you would. This means you can truly give yourself over to the time to be you, because you can gain mental freedom without compromise (without worrying baby is crying because she’s off schedule or needing something simple that the carer isn’t in tune with). Here are a few things that helped me achieve that mental freedom during the blissful hours I stepped out to be me after having a baby.

Firstly, your baby manual. After scrambling a set of rushed yet detailed notes every time tom/dick or harry came over to watch bubs (we welcomed as much help as was offered) I decided there had to be a better way. I created a very basic 1-pager on Powerpoint that had “sleeping & eating” guide on one side and “average daily routine” (with a lot of flexibility!) on the other. This manual included nuances like “bubs’ tired signs are red eyebrows, rubbing eyes, wanting to be held” whilst also covering off where she might be at, at any given time of day “7.45am breakfast milk… 2.30pm afternoon nap”. This meant anyone coming over at any time could quickly look up where she’s roughly at for the day and what’s ahead. Like I said, a lot of flex here but this was (and still is) a guide. Best part of this 1 pager has been I’ve been able to jump in and update/re-print every couple of months when major things changed like dropping a nap or a feed. For me, having the knowledge that whoever was home could use this as a reference gave me so much peace of mind (even if no one ever looked at it!). It was actually almost all I needed.

Secondly, get out, quick. Easier said than done and I appreciate this is all dependent on the baby and situation but think of it like this… you go into hospital and, with regards to your sense of self, you’re your own person. You come out and you’re you, plus a little one who will forever be connected to you. To retain a strong sense of your self without this little plus one, get straight out into the world (minimising the length of time between when you were your own person and when you were on your own for the first time again). This sets you up for success in terms of your independence during the First Thousand Days and ticks off ‘the first outing’ before it has a chance to grow legs and become a ‘thing’. Be alone. Reflect on what just happened (what just frikkin’ happened!). Breathe and think about yourself. I remember some of the beautiful mums at mothers group saying when they left the house alone in those first few weeks they were walking around in café’s and supermarkets thinking “no one knows my secret, no one knows there’s a baby!” I experienced this too! It’s not that no one knows… it’s that no one is looking at you like a pregnant woman or a mum… for the first time in almost a year you’re just walking, ordering, paying, talking… as you. It’s nice.

Third and finally, routine. It’s said that babies and kids respond well to routine but I think the same can be said for mums and dads (and or grand parents). If there’s a regular, weekly time in your diaries where it’s expected and planned that mum is going to take some time to be herself – it’s all just a little easier for everyone. I think this is two fold. It’s easier because it doesn’t have to be a conversation every week, it just happens, and it’s easy because as a mum it’s a written & scheduled reminder (to your Self) to step out of the baby-haze and (however briefly) back into your other, independent, world. Even if just for the mindset of it. Early on we set this up as Saturday mornings where I’d go to a yoga class and bubs would have time alone with Dad (which ultimately proved so important for their own relationship dynamic and ritual building). We also set up a regular day once a fortnight where grandma would come over just so I could get out and run errands and do things for me. If only for an hour and a half – the mental uplift was always evident, no matter the duration.

This is a sponsored post in partnership with Bupa in support of the First thousand Days of parenting. 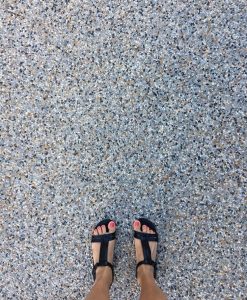