In a recent post on “Career in Focus: Fashion“, I interviewed Hannah Liston (Fashion Designer) on breaking into the industry, misconceptions and advice for people starting out. Today, Hannah shares the compelling story of her last trip to Bangladesh – a country with a colourful and sometimes devastating history, who’s people’s pride and attitude are making for a bright and fruitful future in fashion manufacturing. 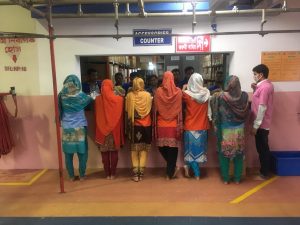 Julie Anne: Tell us about your recent experience in Bangladesh.

Hannah: I’m a senior fashion designer. I was on a fabric/trim sourcing trip and to go-see some perspective factories we were hoping to manufacture with. It was the first trip desingers had been on in our company since the Bangladesh collapse and more recent terrorist threats. Having been in the industry a long time and some of the human conditions I’ve seen – I was bracing for what I might see in such a scarred country. What I found was the best human working conditions i’ve ever seen and factories that were like a gated oasis in the middle of torn up villages.

J: What was most compelling about this experience for you?

H: What really gripped me was the gratitude from every factory owner director for ‘showing faith in our country again’ and ‘thank you for showing our workers that the western world is coming again.’ They need us to come back for their survival. The women of that country stole my heart, seeing their smiles through only their eyes and the bashful pride when I took their hand, shook it and told them they had done a great job. Sometimes you don’t realise the effect you can have on one single person in a day. The initiatives the government have put in place show that they are serious about protecting westeners, removing the connotations from ‘Made in Bangladesh’ since the collapse and getting food back on peoples plates – they kept just asking us to tell people about it … and here I am! 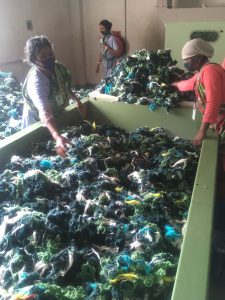 J: You mention you were bracing yourself for the worst but were pleasantly surprised with the oasis like factories. What do you think the disconnect here is between expectation and reality – sensationalised news? Or simply how far the local industry has come since the collapse and terrorist threats.

H: Having been a fashion designer for my entire career, I’ve had exposure to both ends of the scale when it comes to garment manufacturing. I’ve seen human conditions, several times, that has brought me to tears and made me question what I do and why. I went to a photography exhibition in Japan, which showed the bodies of the Bangladeshi workers with tears of blood being pulled from the rubble, and followed the horrific story of the factory collapse on the news. I was bracing for what I’d see on my factory tour in Bangladesh, because from what I knew in my naivety, and what the news had taught me – it was going to be worse than scenes, which had already scarred me in China. I’m not sure if sensationalised is the word I’d choose, but I do believe we were fed the notion that this was how all Bangladesh manufacturing was. I think this shaped my expectation, and having seen so much unrest and violence on the news I was emotionally preparing to see worse than what I’d seen before. What that county is doing to heal it’s scars and the abundance of hope really took me aback. I was brought to tears. 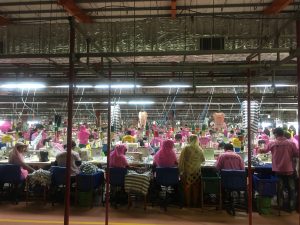 J: What practical steps can the average Australian consumer take to help protect and grow the industry in Bangladesh (are there go-to websites of brands to buy and avoid)

H: A growing global movement in the Fashion industry are labels opting to become ‘Transparant’. This is essentially a brand giving their customers full view into their practices and manufacturing facilities. Some are even going as far as giving traceability to the farm the cotton was grown on. Australians and all consumers need to be conscious of who they are buying from and where their ethics lie. We need to educate ourselves. The standards Bangladesh operators now have to hit are higher than many other cotton rich countires, or the government will simply shut them down – they are taking the rebuilding of their economy seriously. Because of this, many are rated as ‘Green’ factories. I even went to one factory who had a water filtration plant which cleaned all water to drinking standard and provided water to the surrounding impoverished in the shanties around their guarded walls. We need to make sure we are supporting these manufacturers.

What a lot of people don’t realise is that buying Australian Cotton is more beneficial to the environment than many organic cottons. The staples are longer so we yield more from the plant, the garment lasts longer, we contribute to less landfill and, at the end of its life it will biodegrade. There are many factories building relationships with the Australian Cotton stakeholders – how great it would be to help build both of these economies by simply buying a t-shirt. 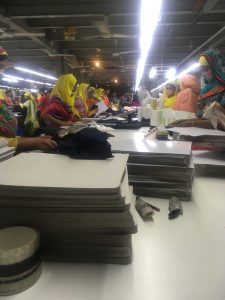 J: It sounds like the locals wanted you to ‘share their story’ and ‘tell people about it’, is this specifically telling people about the government initiatives and new leaf tuned over with the manufacturing industry in Bangladesh?

H: What I felt they wanted was Austrlaian consumers and brands mindset to change, that ‘made in Bangladesh’ does not mean poor quality or that they are buying in superior product made in inhumane conditions. This is the stigma they so desperately want to shake. They want the world to know the elevated standards of their industry, the devastation the collapse caused and that with the high bar the government has subsequently set, how much better the workers conditions are. Women’s health facilities, daycare so that mothers can breastfeed, subsidized grocery stores….

I’m not suggesting for a second that there aren’t factories that slip under the radar, of course there are in any third world country, in China or even Australia but what I am saying is that there has been a tidal wave of change in this country and they are desperate for the world to know.

J: What sets people of Bangladesh apart, what is their way of life or attitude that we can perhaps learn from?

H: Their tenacity and pride jump out at you. The women are vulnerable but quietly bold. The men are old-world but slowly shifting their mindset towards a more equal world. One man I met over there was telling me, with ‘beaming pride’ that he was a ‘new world thinker’ – he was a single widower raising his daughter. He told me with such joy in his eyes how he and his daughter would write each other poetry and make study fun as he was determined she would have the same education and opportunities as the boys. 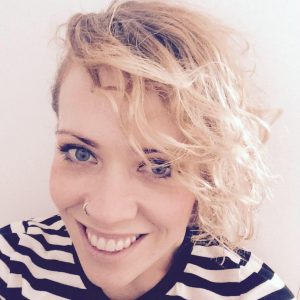