Planning your travels in Southeast Asia? Hanoi is gaining favour with travellers the world over—the Vietnamese capital made it to the 12th spot in TripAdvisor’s 2018 round-up of the world’s best destinations. (Not far behind New York, which landed in 10th place.) The following is a guest post on Hanoi and 5 top day trips. 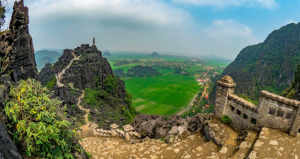 Hanoi is an intriguing city of immersive experiences that will have you shuttling seamlessly between past and present. But for those seeking a rustic retreat, read on for Pan Pacific Hanoi‘s suggestions for day trips from Hanoi that will offer you a respite from the hustle and bustle of city life.

It is no surprise that Ha Long Bay (“descending dragon” in Vietnamese), has an origin story worthy of its arresting beauty:

A three-hour drive from Hanoi, this World Heritage site is North Vietnam’s most visited attraction. It is revered for its statuesque limestone towers, which serve as faithful custodians of the bay’s shimmering emerald waters.

Ha Long Bay spans over 1,150 km2 , but busy travellers can cover the area’s highlights with a day tour, which usually includes visits to popular caves Thien Cung (“Heaven’s Palace”) and Dau Go (“Grotto of the Wooden Stakes”). Apart from caving, Ha Long Bay is also a prime spot for hiking and water activities. In recent years, nightlife and entertainment attractions have sprung up as well. 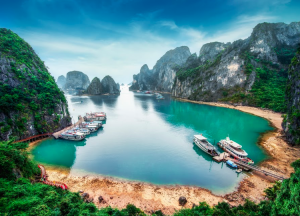 Technically an extension of Ha Long Bay, Lan Ha Bay can be considered a part of the wider Ha Long Bay region.

At Lan Ha Bay, you will also be greeted by a panorama of peaks—about 400 limestone mountains are scattered throughout the bay. But the real reason that visitors love Lan Ha Bay is this: resting snugly between the karsts are pristine beaches that await discovery.

Adventurers take note: rock climbing, trekking, kayaking, and sunset beach yoga by candlelight are some of the activities offered by tour operators such as Asia Outdoors. If you are torn between Ha Long Bay and Lan Ha Bay, pick a tour that provides the best of both worlds.

For an antidote to city life, head to the rural Mai Chau (a four-hour drive from Hanoi) for a day of healing and slow living. The best views are courtesy of the area’s rice terraces, set against a postcard-perfect hilly backdrop.

Longer stays by eco tour organisations are recommended if you relish the opportunity to work alongside the villagers to pick up farming and fishing techniques, while getting to know them better over a shared meal or two. Day tours that include sightseeing via trekking and cycling are also readily available. 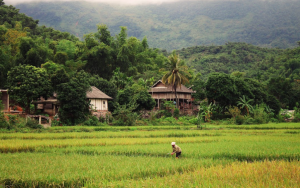 Tam Coc (“Three Grottoes”) is a three-hour drive from Hanoi; it’s a great getaway option if you hope to be transported to a pastoral paradise.

The general consensus is that Tam Coc is best appreciated while on a paddle-boat ride through the River Ngo Dong, where you can survey its limestone formations and rice paddies in their resplendent glory:

The two-hour sampan-ride is a definite highlight, meandering through dumpling-shaped karst hills in a flooded landscape where river and rice paddy merge serenely into one; keep an eye open for mountain goats high on the cliffs, and bright, darting kingfishers. (Source: Rough Guides)

Most of the boat tours at Tam Coc will take you to its three caves, known as Hang Ca, Hang Hai, and Hang Ba (translated to mean the first cave, second cave, and third cave respectively). Don’t be surprised when your boat enters the caves to give you a magical glimpse of what lies within.

To live as the locals do, head to their favourite weekend retreat: Ba Vi National Park.

Formerly a French “hill station,” or a place of rest for colonial officials to escape the summer heat, Ba Vi National Park today attracts hikers and nature lovers. It is renowned for its three peaks (the highest is Dinh Vua at 1,296m) and over 1,200 plant species. 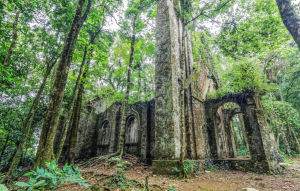 You can also bear witness to the remnants of French architecture in the area; in particular, a crumbling cathedral with a collapsed roof (in foggy surrounds), which has attracted photographers in droves.

Welcome to Hanoi! Read about Hanoi places of interest, or speak to our team at Pan Pacific Hanoi to enquire about our latest offers for rooms and suites.