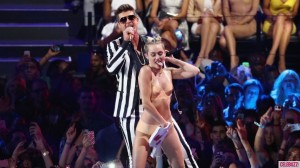 From the Britney-Madonna Kiss 0f 2003, to the Kanye West – Taylor Swift award saga in 2009, the MTV Video Music Awards have had a history of delivering some jaw dropping moments over the years. Yesterday, social media was abuzz with discussion around Miley Cyrus’ on-stage twerking moment with Robin Thicke, at this week’s MTV VMA’s. The majority of comment vibed towards ‘OMG what has she done’ with tweets like, “When rihanna is staring at you like you are out of your mind you should really rethink your life” (@AdinaRachel), while a minority of supporters were inspired what she did with the performance, “Go Miley!!! I have so much respect for her now it’s insane. She came, she performed, and she owned that sh*t.” (@KaitlyndianeKb)

In part, I suppose the shock is a result of seeing a ‘young girl gone wild’… knowing Miley as the daughter of Billy Ray, or having watched her grow up before our very eyes as Hannah Montanna on the Disney Channel – the hard part might be letting go of a sweet girl stereotype and start accepting a sexually confident, vivacious performer as she creates herself however she deems fit… making her own adult choices such as this, to literally give herself on stage.

At the end of the day, Miley seemed to be fulfilling the brief (so to speak), interpreting and delivering a ‘live’ version of Robin Thicke’s “Blurred Lines” video clip…a clip that calls for shocking sexualisation – so shocking that’d you’d interrupt your day to check out the uncut version online. Although ‘art’ is ambiguous, the fact is that Miley is an artist in her own right, with performance in her blood… she has taken the already controversial theme from Thicke’s video and given it her own pelvic thrust… just as an actress might take on a character for a video clip. The fact we’re all talking about it today is testament to the ever-known fact that sex sells and this girl knows it. Miley gave it her all to own it… even if she lost part of herself in the performance; it’s her journey to take and ours to judge as an audience in the meantime!

What’s your judgement? Did she own the performance as an artist or was it pure trash?