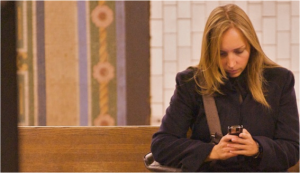 Look at this this picture. What connotations does it bring up for you? What do you think of the girl?

If you’re like me, you might draw the simple conclusion that when someone is head-down, fixated on their ‘device’, it’s taking something away from their experience of ‘real-life’.  If we see one person sitting at a bus stop, head-down into their phone-world, and another person sitting next to them, looking up and experiencing the moment we might think, “how sad… no one talks to each other anymore”. I can’t remember how many times I’ve thought tisk-tisk-tisk, smart-phones have really ruined the way people interact with eachother.

Recently I jumped on a bus and was surprised that around eight-out-of-ten people were ‘face down’ to their screens… I discussed this with a few friends for their opinion on the matter. One friend mentioned to me that when she first moved to Australia, from the UK, some years ago she loved the fact that people were interacting with one-another and having friendly conversations – however, in the past five years she’s watched people become less and less connected in real-life and more smart-phone fixated.,. which she found disappointing & disheartening.

What if the girl looking down at her phone at the bus-stop is smiling-on-the-inside at a photo of her twin sister overseas… whom she hasn’t been able to see for over six months – except for the daily Instagram updates that make her day?

What if the young man with the headphones (in looking down at his mobile) is hearing his best mate’s new album for the first time and sharing it on the new Myspace platform to help promote his mate’s big dream?

What if the woman scrolling her screen whilst standing street-side is using her taxi-app to track her vehicle until she knows she’s safely off the street and on her way home to her family?

Join me in giving smart-phone lovers the benefit of the doubt over the next few weeks. Next time you look at someone who’s head-down-fixated in his or her smart-phone, I’m asking you to think, just for a moment, “what if”. Use your imagination.

We might just find that if we can shift our perceptive attitudes of this communicative behavior; we can also also shift a view of what is being lost to an understanding what might be being gained.

“The human voice carries too far as it is.. and now you fellows come along and seek to complicate matters…”-Mark Twain on the invention of the telephone. (I wonder what he’d say about the smart-telephone!)