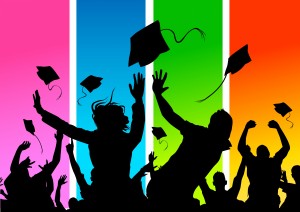 I love my job. In fact, I love the industry that I work in (advertising/media)… and, really, its because I love the eclectic, likeminded people within it – the people that that really make it incredible, day-in-day-out. The other nut bags, who are Just. Like. Me. So I think being with ‘my people’ is why there’s a lotta love. That and the fact I really have to think (very) hard… (quite) often.

Advertising & media is this crazy, unpredictable, entertaining beast of a world that has the ability to chew you up and spit you out, or shape you up and see you shine. As I’ve been in the industry over ten years, I’ve graduated to this level of understanding about what makes people great, from the beginning. I meet graduates and people who are in their first years in the industry – and I try to help them, just as I was helped, and I note the commonalities in people who seem to ‘make it’ (make it being achieve what they said they set out to achieve).

When I was at Uni, studying Journalism communications, I remember a lecturer telling us that one of the single most important aspects of breaking into any industry and being successful thereafter is having a strong network. I heard the words but didn’t get it. They were saying – “just go meet people”, “build your network… start making contacts… go to a networking night” and I was all like, “I went to that networking night… I met three other students… we’re friends on Facebook now… is that a network?”. I didn’t get the purpose, the benefit.

Now I proactively try to meet people just to grow my knowledge, my perspective, my inspiration, my creativity. Now I like the feeling of having lots and lots and lots of connections that vary between acquaintances to life-long friends in the– and I get the biggest kick out of introducing someone to someone else when I know they have great things to offer eachother. To depart after making an introduction such as this, and watch it (their connection and story) progress from the sidelines is one of the most unexpectedly satisfying things I do these days.

It wouldn’t be an ideas blog without a top-five, so here’s mine for new graduates getting involved;

Don’t think of it as networking, think of it as living. As you live and get older you meet more and more people, so the number of people you know increases. Use this to your advantage but ‘give back’ by hooking individuals up with other individuals who will be able to help them.

Get off Seek.com and get onto your parents, other adults you know and their friends. Ask them who they know in the industry you are interested in getting into. Hook up work experience. Prove your ass off. Get hired.

Recruiters and HR consultants are a great resource, so start building relationships with them now. Places like Chandler Macleod use a combination of traditional skills assessment with psychometric testing to make sure that the right person is being placed in the right role with the right employer. This is great news for new graduates as it helps the hiring decision makers understand how you’ll ‘fit’ at their organisation, which is often more important to them than how many years’ experience you have. I’ve been through psychometric testing at least three times in ten years (through interview processes) so get your head around it so you can own it when it comes up.

Be able to deliver a solid one-liner on what you want in your career – even if you don’t have a clue yet, make something up that you feel is somewhere close to the mark and say it firmly, with confidence, whenever asked. People like people who know where they’re headed… know that and deliver a solid one liner.

Don’t rock up to an interview saying anything about what YOU want to get out of working there. You’re in an interview (or work experience position or internship) for one thing – to prove how valuable you are and what you can offer the company. Keep this central in your mind at all times and take initiatives towards proving. it

Oh one more… fake it til you make it. Be confident, learn, do. It’s up to you.