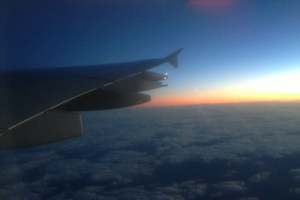 Long haul flights are brutal enough. When first boarding and carefully organising your precious inches of cabin-space; everyone smiles politely at one another and offers whispered ‘pardons and apologies’ in understanding the mutual pain you are about to endure together. Without any prior discussion, the unwritten flying-rules are abided by; a certain decibel-level is respected, stray airline blankets and pillows are fastidiously re-allocated to their owners and children are hushed by their parents, in a hopeful precedent for their behavior to follow. Everyone’s doing their own pre-flight drill; mine is Lip balm, check. Water bottle, check. Trashy magazines, check (poor Amanda Bynes…WTF), iPhone in flying-mode and switched off (check) and cross-check that again, and again (check & check).

It seems like pretty much everyone knows the basics of international flying-etiquette. So, how could we reach a point in society where one person’s understanding of those unwritten rules are so far beyond everyone else’s that they feel it’s okay to open their own Tupperware container filled with yesterdays’ tuna-fish casserole on a long-haul flight? When this happened to me last week, with the passenger sitting next to me, at 3am, I yearned for my mobile phone and internet access for a real-time vent… perhaps this was even serious enough for Ventime.com . If I weren’t thousands of feet above the cellular-data range my FB status update would have gone something like this; “Julie Anne Longano is sitting next to an inconsiderate & inappropriate human on her long-haul flight. Tuna casserole is unacceptable even in an open-plan office space, let alone a pressure conditioned cabin containing air that will be recycled & reused by hundreds of people for the next 16 hours.”

My memory is vague (I’ve spent the past week trying to block it out)… but for 16-hours “Tuna Eau Du Toilette” scent filled my EVERYTHING. My nostrils, my face, my lungs, my blood, my brains, my dreams, my in-flight movies; ‘This is 40” became “This is Tuna”, then “Silver Lining’s Playbook” was “Silver Tuna Cookbook” – I finished off with “Argo” and the main line in the film which is “Argo f*ck yourself”…. Well, that one remained pretty much the same but was directed, mentally, to my fellow passenger. It’s amazing how much angst and tension one can build over the course of 16 hours!  I channeled so much yogic energy just to keep my face from morphing into a look of utter contempt. “Namaste Namaste namastasty tuna…!!!

When I landed, I decided to extend this would-be status update into a full blog because I obviously feel that ‘tuna on airplanes’ is now a major issue facing humanity, and needs to be addressed swiftly and sternly before we can ever hope to achieve anything else as a united people.  It’s getting back to basics so that we can all get along a little better in the bigger picture. I’m just thinking, If we can all get on the same page about the inappropriateness of a fish-casserole on a plane then, perhaps… the world could be our oyster?