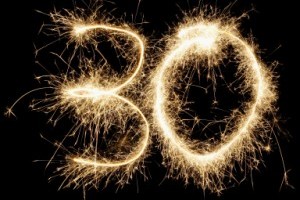 I know it’s only a number and you are ‘only as old as you feel’… or ‘as young as the woman you feel’ (isn’t that the saying?)… but since I’ve got no plans to go around feeling younger women, I’m forced to spend some time acknowledging the gravity of one of life’s big, yet pointless, age-milestones. What are the others… 16, 18, 21, 40 and then every-decade after that ‘til you hit the big-time at 100 and get a letter from The Queen? By the time I get there it will probably evolve from ‘a letter from The Queen’ to an ‘iMessage from King William’… or his unborn child – now there’s a frightening thought).

As far as I can tell, nothing happens (per se) when you turn 30; there’s no driver’s license test, no ‘coming of age’ recognition from your family or friends… and it’s probably one of the last birthdays before those annoying ‘over the hill’ cartoonised greeting cards (GTFO if you give me one this year… because I am still young enough to use GTFO so I don’t deserve it). There’s no event, no real milestone or achievement besides ‘still being here’ – you’re just… thirty.

When I was researching this blog post I used Facebook’s new ‘graph search’ to look up a list of ‘My Friends who are 30 Years Old’ (thanks Zuckerberg, I finally found one use for it). Up popped the images and names of dozens of people I know who are walking around, past the 3-0 birthday, now enjoying their 31st year on earth. Some of my 30-year-old-friends seem to be achieving career highs after years of hard work and dedication. Some have profile-pictures in wedding attire, some pics feature tiny baby faces, freshly created – or fluffy animals, or breathtaking travel destinations. Mostly, ‘the thirties’ people seems like they’re fitting their skin and themselves more comfortably than before. Maybe I’m just being idealistic or reading into classic Facebook ‘look at my amazing life’ portrayals – but I don’t think so – I’ll take it because it gives me something to look forward to.

If we consider that modern technology and medical advancements will see us all getting to 100 years old… then ‘thirty’ isn’t even a third of the way through (I know right?). I’ll keep an eye on my 33.3rd birthday for that – but isn’t it strange to think one-third down, two thirds to go (all things going well). Two thirds to go. Two. Thirds. To. Go. If I think much deeper than that it hurts my brain so I stop.  BUT I think big-milestone birthdays, whether you like it or not, force you to look up at the scoreboard, have a quick assessment of things and get back on with it (after a few cocktails).

I, for one, am undertaking my three-decade-assessment by travelling to three places I’ve never been before. May 2013 will bring Hawaii, Disneyland and Mexico. Get leid, ride a rollercoaster and eat some tacos.