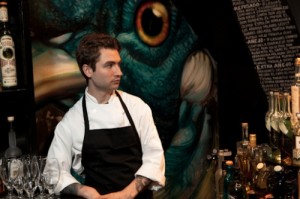 After ten-years as an esteemed pastry chef (with world famous ‘WD-50’ no less), Chef Alex Stupak left the pastry field to find fear. That might sound odd but this Chef searches and wants the feeling of “waking up scared, every day”.

After taking the big leap, Stupak is now awoken to the haunts of his 18-month-old ‘child’ (as he refers it) ‘Taqueria’. Then his other, ‘newborn’ baby girl, Cocina, stirs in a separate bedroom, just-now beginning to show her personality & quietly winning the hearts of her local village family. Empellón Cocina is not what you might be thinking from this ex-pastry-chef … Its not Infusion Pastry-Mexican (Taco Tarts anyone?) – but rather a high-end experience that sees the application of Mexican cooking methods & technique translated to the plate in a surprisingly progressive way.

We experienced dishes that could have easily been served to us sans-tortilla as stand-alone dishes. 1-Pound Lobster with Melted  Tetilla Cheese and Tortillas (self-scooping made this dish a joyous ceremony to share). A Sunny Side Duck Egg had us stirring a dish that was fettuccini-like; unexpected for a Mexican restaurant but deserving of its place based on the method of its making. The extensive Tequila and Mezcal menu would need a separate review in its own right.

The point is challenging norms, with respect to Mexican cuisines’ heritage. Empellón, by definition, means to push – and that is precisely the action being practiced in the hot kitchen of this very cool East Village restaurant. The evolution of the restaurant is of utmost importance. It’s about shaping the baby girl in her formative years, to ensure she is equipped for her calling as an eternal woman of The Village.

As Stupak speaks of his restaurant & listens to patronage feedback, his eyes are opened wide & he rarely blinks. As in a thriller-movie-scene; his (and his families’) very survival depends on being fully alert & responsive to every sound, scent, spoken word and energy.

At almost midnight, his wife Lauren Resler (also a pastry chef) rings the bell for service on the last of the deserts, for which she is entirely in charge of for both restaurants. Exhale, another evening of impressed clientele, for now at least. The restaurant is superb. Stupak is one of the last staff-members in the restaurant polishing knives and forks in preparation for tomorrow’s service… or perhaps, he is just too afraid to go home to sleep.

Do you like to challenge yourself to the point that you get a little scared?

Have you ever left something you had mastered in pursuit of an alternate path? 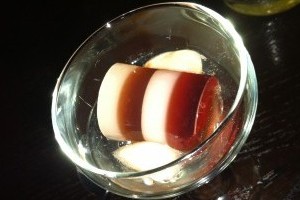 *Dish Edits since time of posting; special thanks to Joe Biden for notes.