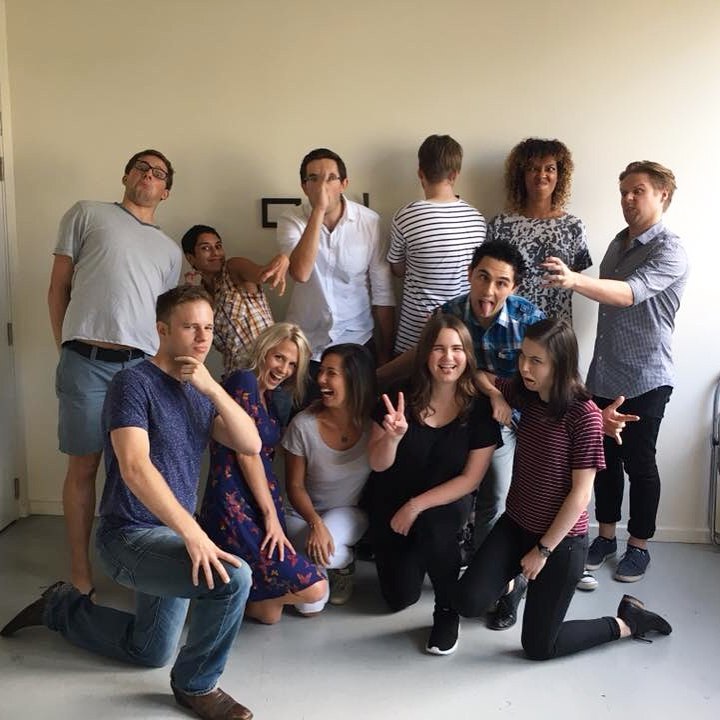 Two years ago I went to an improvisation comedy show in North Melbourne called “The Improv Conspiracy”. That particular night the show being performed was a ‘Harold’ format – which is basically a longform comedy structure where teams of people act out random (improvised!) scenes in groups of 7 or so. There’s a lot more to it than that, but as an audience member I didn’t know anything about all that, I just saw someone from the first team walk on stage and ask the audience, “for one word please – as inspiration to kick us off”. Someone in the audience shouted back “bicycle!” with enthusiasm (… I can only guess because ‘bicycle’ is such a deep and meaningful word?!) … and then I watched in awe as the team of 7 people on stage physically transformed themselves (their collective bodies) into a single working, moving bicycle… all without talking to eachother. Think about that – all the communication in achieving a cohesive structure and mini performance was only planned and executed via communication through their eyes and their actions – there was no team leader or agreed plan on how to take the ‘random audience word’ and make it something as a group, it just happened. Fascinating. After their mini bike performance, one person to took centre stage and delivered an impromptu monologue about a bicycle… not particularly funny but a true story – which I would later learn was being picked-apart in silence by their team members side-stage as inspiration for scene themes that would immediately follow.

I watched the rest of this show in utter disbelief. I mean… this was about as real as it gets. I watched team after team act out scenes (in groups of two or three people on stage at a time) that were completely fabricated from thin-air, right there and then, and yet seemed to have a beginning-middle-end story arc that occurred naturally and seamlessly. In the dictionary, the definition of Improv Comedy should be “people with a ridiculous amount of courage do random things together”. The show ended with the host reminding the audience of the upcoming workshops and student terms which were available to everyone. Wait… What, what, what? You can freakin’ learn this (I thought) – you mean these people aren’t all gifted artists, with comedy legend Steve Martin for a dad, who grew up in special circus-school to learn these tricks… you mean “I” could do this? Me? I. Could. Do. This.

Then… two years passed. You know how it is. You want to do something, but it’s outside your day-to-day routine… outside your comfort zone, or it seems like a big commitment (either financially or from a time point of view). So I put it off, until next month, until next term, until next year –so many of us do this with those ‘extras’ we passionately want to peruse but put in the one day basket almost by default, without even intending to do so.

Then… a friend of mine Marina posted this article on Facebook, which, quite simply flipped the idea of a ‘goal’ or wish from something ‘wanted’ to something willing to struggle for. So simple yet so profound (worth a quick read). I realised I was absolutely willing to struggle a little, in terms of time comfort-zone discomfort and the time commitment (being 7-10pm every Tuesday evening for 12 weeks, after a full days’ work) for the up-side of what I remembered about that show. The creativity, the spontaneity, the life, the pace, the reward when it seemed to work… the laughter of the audience.

I pressed the green button. “Notification: Your Enrolment to Improv Comedy Level One at The Improv Conspiracy has been Processed”. No turning back.

Now, I’m not going to go into detail about the course structure and tips over the twelve weeks, or the details on how the format works (you can discover that for yourself at The Improv Conspiracy) – but I will share some highlights of my experience;

Walking into my first class was easily the most nervous I’ve been in years. I remember feeling similar to how I felt at University Orientation week some 15 years earlier. I mean in my day-job I walk into boardrooms, high-pressure situations, functions and events where I arrive alone and work the room and don’t skip a beat, I lap it up even – but these people were somehow ‘my peers’ and I felt a truly rare emotional nervousness about impressing them, with my first impression. It’s like they could see through me and I knew it. I thought more about what I would wear to that class than I did for most parties or events (what shoes say “effortless casual comedy chic”?). I don’t know what to say about this except that, now that it has passed, I would learn to take the nervousness as a sign – a sign of caring and therefore alignment with passion.

When you’re “in your element” 10pm on a Tuesday night after a full day at work can feel more ALIVE than any other time of the week. You know the feeling of being in your element, when you’re doing something you’re wired to do, born for – thoughts come naturally and with ease, good things happen without much effort, time goes by quickly and your inner voice is nodding incessantly for more more more because… well finally you’re doing what it your mind wants to be doing. More on this in Ken Robinson’s “Finding Your Element” a book I’ve loved and recommended to many, if you’re interested.

In life, as in scenes, it’s important to listen to your scene partner. Not to use the time to think about what you’re going to say next, but to actually listen, so the quality of your response is high (it makes sense) – and in turn, if your partner is listening with equal measure, the quality and content of the dialogue is elevated. On stage this works for the audience, in life this can work for all your relationships, family, friends, colleagues, partner. I learned that this takes work, it doesn’t come naturally to a lot of people but it’s perhaps the most important aspect of successful improve comedy and building/maintaining relationships. Seems like a no brainer but unless you apply your brain – dialogue can become like two people waiting in turns to talk things at eachother… and that’s not fun for anyone.

Whenever you feel nervous (on stage or in life) just tell yourself its excitement. Your body reads the physiological signs the same anyway, so use it to your advantage as opposed to your peril. Trick yo’ self! It works.

Finally, although our end of term show was a raging success (*self evaluated), it’s fair to say the process (I am not using the word journey) was the real upside here. Taking the time to learn technique, think outside the bubble of normal day-to-day, meet new people and have fun with them – actually play games with them, that was what floated my boat more than the audience laughter that I got in my moment on stage. I must admit though, when I was standing up there performing and could hear the laughter of the audience (meaning that… for even just a moment… I was doing improv comedy well) – I thought about being in that audience two years ago… and it didn’t matter that it had taken two long years to make it up on stage, it just mattered that I wanted to do something so badly, and that I was actually doing it. I did it…

So I’m getting more of my “do” on. Things I’ve always said I’d love to try but never gotten around to. Clock’s ticking. Drawing & Painting classes with Geoff Dupree at Melbourne Studio of Art starts tomorrow… if the improv comedy course wasn’t funny enough this should be bloody hilarious. And another thing… while I’m here – I signed up for this one after I saw a (highly targeted and relevant) sponsored post on Facebook – props to my friends in ad-land over at FB… plus the motivation for signing up to improv comedy was originally from an article shared on Facebook) – I just like to highlight the good-stories that Zuckerberg and The Book bring to life from time to time because we seem to gravitate to bashing our tech-slash-social-media-lyf-pitfalls more often than not. It’s not all bad. Now get off your phone 😉

Special thanks to my fellow students in Level One and big shout out to Adam Hembree, our teacher, who was… the perfect mix of everything.