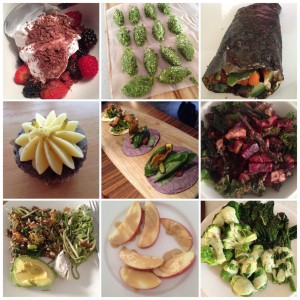 I was recently amazed to watch a friend’s updates on social media as she posted about her trial  ‘vegan month’. Some of the photos (of her food and her Self) were simply incredible. I was fascinated to learn more, to understand why someone would even consider going vegan – and how it would affect them. Today, Breanna Elston candidly answers my questions on her very own #BreezaVeganMonth adventure. You won’t believe some of what you’re about to hear… who knew you could afford more clothes while flying vegan… or that you might face unexpected levels of judgement?

So Breanna, what made you want to try a ‘vegan month’?

#BreezaVeganMonth came about in a rather convoluted way.  Last year I discovered that I was severely intolerant to all dairy and eggs (that’s what those trips to the toilet were about!), therefore, I cut both out completely.  Around the same time I began studying Health Coaching through The Institute of Integrative Nutrition.  This is an online course through a New York based school and I began what I would call my ‘wellness journey to becoming my best self’.  As I progressed through the course, I adopted different health coaching elements into my life to see what worked best for me and this is a process that I continue to this day.  I believe in bio-individuality and what works for one person, won’t necessarily work for the next which is the foundation of the school and its teachings.

Following on from the food intolerance testing, I had been seeing a Chinese Doctor for a problem where my body carries too much heat (yang). This was causing skin issues in the form of excessive overheating, redness and severe dermatitis on my face (just on my left cheek – not very attractive!!).   I went to my GP and she prescribed cortisone cream, but I wanted to try to fix the cause, not the symptom and looked into Chinese Medicine, Acupuncture and Cupping as a form of treatment.   My Chinese Doctor explained that meat, alcohol, chilli, garlic and coffee are all heating foods, he also told me that I have too much protein in my body, to cut down on it and also cut out seafood.

In short, this basically meant I had to embrace veganism for the month I was being treated and #breezaveganmonth was born.   I used my Instagram account to share my experiences with photos and descriptions of my vegan meals.  Using Instagram made me accountable to achieve my #breezaveganmonth goal from a social media perspective and also provided a sense of community support which spurred me on!!

I also have A+ blood type which lends itself to a more plant-based diet which was another reason for trying veganism for the month.

For those of us health novices out there… what’s the technical definition of ‘vegan?’

In basic terms to be ‘vegan’ means to abstain from the use of animal products.  There are differing degrees of veganism out there.  For example, a person may just choose to not eat any products derived from animals, or they may take it further and also not wear any products that are derived from animals.  There is the whole philosophical side to veganism, whereby vegan’s do not like to exploit animals as a commodity and are opposed to animal cruelty.

Let’s be honest… were you partially inspired by how good Beyonce and Jay Z looked after their vegan month (prepping for the Grammy’s?)

Haha, I actually came across an online article about Beyonce and Jay Z’s vegan Grammy’s prep about halfway through my vegan month and felt very on-trend.  I felt like ‘veganism’ had perhaps reached its tipping point into popular culture and that it was so much more than Hippies/Dreadlocks, Hare Krishna food stalls and Rainbow Serpent festival!

What have you noticed as the benefits and downsides of being vegan?

1. My skin and eyes became clearer, my overall appearance improved – including my body shape changing (thank you god my thighs are smaller!) and losing a few kilos.

2. My digestion improved, I generally felt lighter, more energised and happier.  The happier part was a nice surprise!

3. Definitely the Cash savings.  If you remove fish or meat from your meal, then it makes eating a whole lot cheaper!

1. Eating out is difficult and I dreaded saying to the waiter “I’m vegan, what can you do for me?”.  If I was a fussy person then I just wouldn’t have been able to eat out. I basically said, “Whatever you can do that is vegan will be fine” and ran with that.

2. Eggs, milk and butter are hidden in a LOT of things…..cakes, pizza base, etc.  You have to ask and generally you won’t be able to have it.

3. Some people were quite judgemental of my vegan experiment, thought I was crazy and would be missing protein.  I just ignored them, tried to be organised, well-balanced and planned my meals. I also try to really listen to my body and eat appropriately.

Did people notice you ‘looked better’ before you told them about what you were up to?

Yes, people told me that I was looking better, clearer eyes, skin glowing, smaller waist and those kinds of comments.  All welcome of course!

Did your energy level change (if so, how?)

I would say that my energy increased three-fold.  I was pretty much bouncing around like some kind of vegan lunatic!!  I was less tired and on a bit of a natural high.  They say “you are what you eat” and embracing an unprocessed plant based diet has worked wonders for me personally.

Has it been easier or harder than you thought it would be?

It was exactly how I thought it would be.  To be honest, I found cutting out dairy and eggs 8 months ago far harder than changing to a full-blown vegan diet.  I still longingly stare at a poached egg across the table when I am out at brekkie, but the upside for not eating those foods (no stomach issues) cancels out the desire for them.  So I just accept it as how it has to be and move on.

Were you ever tempted to stray during the month?

No.  I was not tempted to stray.  I gave up drinking alcohol for 18 months about 5 years ago, so I knew I could do it once I made the commitment to myself.

I am sure a little bit of something non-vegan friendly snuck in there without me realising it, but I did the best I could do at all times and that is all that matters.

Eating vegan has been such a positive experience for that I am now embracing it full-time, however I will never give up raw honey – so I am not a true vegan, but that is OK with me.  Whatever works for you is my motto.  I am not into labels and honestly if I ever feel like eating a steak, then I probably will eat one but will always choose free range, fully grass fed and chemical free meat.

What advice would you give to someone who’s considering going vegan (for a trial or more permanently)?

I would suggest trying it for a month and noticing how it makes you feel.   I don’t believe that veganism is for everyone; some people really need meat in their diet and don’t do well on grains.  Trial and error is the key.

I would also suggest thoroughly researching veganism and also potentially using a program like Vegan Easy to assist with meal planning and recipe – www.veganeasy.org.

Lots of people have gained interest in the #breezaveganmonth on Instagram… aside from this blog-interview, are you going to fly the nutrition flag in any other way in the longer term?

#breezaveganmonth has definitely been an enjoyable experiment from my perspective and I have been really surprised and pleased by the interest it generated.   My guess is that everyone is trying to lead a balanced, healthy and happy life the best that they can, but sometimes life gets in the way and foils your plans.   Health, wellness and nutrition is my passion and I am definitely exploring some different avenues to move forward into this space using my health coaching study as a solid foundation to grow from.

You’ve got a great career in the media industry, but from my experience, such a career is not always suited to positive health ( lunches, events, unexpected hours that may lead to dropped plans and routines). How did you manage this through the month and how will you continue to?

The problem of “not being suited to positive health”  is actually going to be the basis for my health coaching practice because I can draw on my own experiences and work with  people facing similar challenges.  In the past, I have compromised myself and was sucked into the machine, but ultimately I discovered that it chewed me up and spat me out.  When I left my last job, I was very unhappy, very unhealthy and severely burned out.   I have spent the last year getting my health and well-being back on track, I made a promise to myself to always put myself first and to never lose perspective on what is most important.

Thankfully, I have a very supportive workplace and right now my work/life balance is the best it has ever been. This means I have the energy to study after hours and also the ability to make it to a Cross Fit or a Yoga class when I plan to.  What I have realised over the last year is that, for me, personally achieving ‘balance’ is the key to the happiest, healthiest Breeza, which of course is my ultimate goal.  Makes sense, right?

Here are two places that were really helpful to eat in at and get take away from.

The Newmarket Hotel on Inkerman St in St Kilda – http://newmarketstkilda.com.au

Vegan Tacos on the right.  The waitress was very helpful and the kitchen veganised a number of dishes for me! 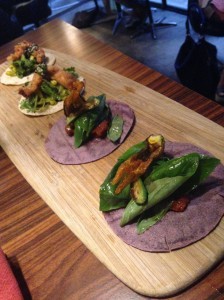 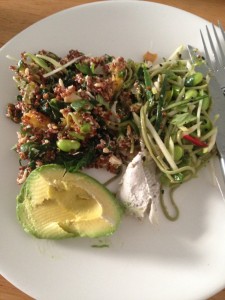 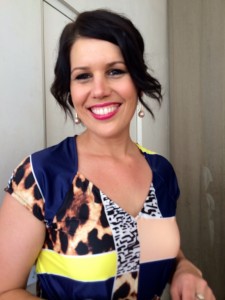